Yep.  We were a bit behind this year and Ill blame it on our self indulgence because thats the truth.  This years letter is also long and rambling because of that theme.

We started 2009 without much fanfare, except for Mike and Parkers temporary bout with deafness from an AC/DC concert.  Fie yah!  Mikes probably petering out of his sound pummeling pastime after GWAR and Shpongle and Gogol Bordello, but well see.  Bonnaroo still beckons.  Mike ran away to Burning Man again this year in an effort to connect with pure creative human spirit and thus be a more effective teacher and better husband and father.  Who is he kidding?  It was just an escapist romp and he knows it.

Then in February we visited dear friends in Idaho, and returned to find the beehives blown all over the place.  That was a fun puzzle to put back together, and this years honey crop was slim.

Priscilla and her Mom went out to Tempe to visit Ian and Michelle and had a mighty fine time and behaved themselves mostly.  Ian is still plugging away keeping the University of Phoenix computers going, and he and Michelle are having a great time together romping all over the country for concerts and such.  Its wonderful to see them so happy.

The spring brought a bumper crop of yummy morels to distract from more pertinent obligations.  But who can resist the gifts of the forest, free for the picking?  So what if it takes 3 years to do a weekends worth of work, say, on a storage shed or something?

We thought we would get into the freshwater prawn ranching, but after 12 hours of driving to get 16,000 tiny shrimps into two tiny coolers in a mini cooper, we returned to watch them turn belly up or otherwise disappear into the oblivion of the pond.  OK.  So I didnt check the pond chemistry first, but it is full of life!  Looky at all of them frogs and salamanders!  But it seems crawfish and catfish are more in tune to our environment than tropical exotics from Asia.  Go figure. But, in his continued effort to demoralize the forest, Mike introduced bamboo in the hopes of attracting pandas.  Meanwhile the cattle and the donkeys are staring in disbelief and waiting for another scoop of sweet feed and an ear rubbing.

Ian and Michelle came to visit in June to visit and go to Bonnaroo, then Pris went to Kansas for a family reunion right before we went to Alabama for another.  Pop turned 75 and received about as much fanfare as he seemed to want.  Its also been a tough year for losing loved ones, but the weddings and new babies and reconnecting with dear friends helps to keep the heart juice fresh and happy.

Priscilla took a wacky jaunt to Colorado with her Book Club Girls then to New York to play with the Saipan Girls while Mike went to Savannah for a week of art workshops. Then he and Pris went to the beach for a few days where they contemplated swimming across the Gulf to another island escape but decided to face their lucky-to-still-have jobs and their respective new bosses with good energy and attitudes.

Meanwhile Parker pulled on his cowboy boots and took a swig of Wild Turkey while listening to his CB and smoking a cigar before pouring the concrete floor to the shed and keeping us supplied in venison.  He gave up a career in child tending to begin one in kiln loading and customer satisfaction while he finishes his degree in concrete industry management.  He and Sara are happily frolicking in Arizona as this is written, taking in the company of Ian and Michelle, a resort in Sedona, the Grand Canyon, and other amenities of the desert.

In the fall Mikes sister joined life in Sassapaw for a while in her transition back to Tennessee living, and cousin Linda stopped by right before the second Bull Burn.  This year Hamish was cremated in effigy only, but the car received another coat of paint and the burning was especially eventful.  Who knew that several grosses of ten year old bottle rockets taped to a burning bull sculpture would rather fire independently at the crowd of onlooking friends and French exchange students than fizzle and spray in splendid sparks as planned by the unthinking sculptor.  Priscilla always mentions the poor trembling French girl who just stood and repeated, I dont understandI dont understand, but no one was injured, thank goodness.

Later more cousins came to play in the woods for an autumn weekend, right before Ian and Michelle came to visit for a pre-holiday holiday.

Then Priscilla and Mike went to Thailand to see friends and be tourists and thats why this letter is late, but by golly we are glad to be able to keep in touch even if its once a year with old school paper technology, and please please know yall are always welcome here in Sassapaw! 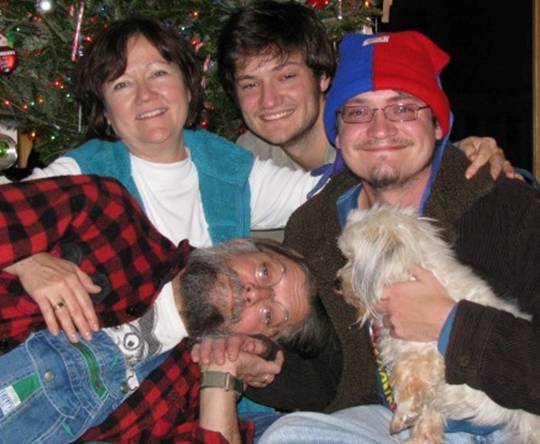